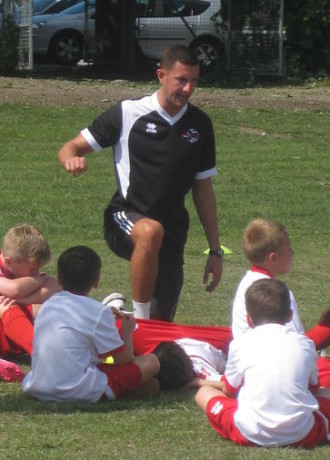 Lewis has a vast playing experience and is well known around Sussex, having played senior football for the likes of Eastbourne United, Rye United, Hailsham Town, Sidley United and Seaford Town where he has earned himself a reputation as a reliable, footballing centre back who is comfortable in possession and uncompromising out of it.

An extremly well qualified coach, he holds his UEFA B coaching qualification as well as the Youth Module levels 1 and 2, Goalkeeping level 2, a level 2 Certificate in Fitness Gym Instructing and his SAQ P award.

Lewis joined our team in February 2013, initially only on Mondays but is now also a popular and respected coach of our oldest group on our Thursday elite night having previously working for Masterclass Sports Tours as a football coach, leading sessions in Spain and Holland.

He has qualified teacher status, holding a DTLLS (Diploma in Teaching in the Lifelong Learning) and PTTLS/QTTLS as well as his A1 NVQ Assessor qualification.

He has previously worked as an NVQ tutor / assessor in 6th Form Colleges across East Sussex delivering NVQ level 1, 2 and 3 Sport and Coaching based qualifications and is currently a cover supervisor at a 6th Form College.

• DTLLS (Diploma in Teaching in the Lifelong Learning)