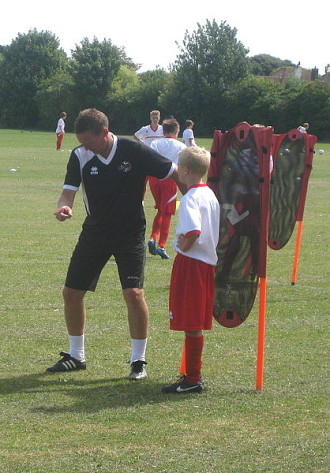 Tobi has vast experience of both playing and coaching football and has earned a reputation as a respected coach across Sussex, working extensively with children aged 4 to 18 as well as adults in senior football.

As a player Tobi spent his youth with Brighton & Hove Albion FC, playing for their academy sides as well as their full youth side alongside professional footballers and represented Sussex at U14, U15, U16, U18 and U21s.
On leaving BHA, Tobi forged an impressive non league career with clubs such as Sutton Utd and Woking as well as a host of Sussex’s top county teams such as E/B Town, E/B Utd and Langney Sports (now E/B Borough FC), making approx 700 appearances, scoring nearly 300 senior goals and has the unique achievement of winning at least one senior trophy in each of the last 4 decades.
Tobi has coached with local youth football clubs for nearly 20 years and has worked with BHA FC Girls Centre of Excellence and the Sussex Sports Partnership at Sussex University.
He has enjoyed success as a senior coach and manager, coaching Eastbourne United to a County League and Cup double before managing Worthing United to their highest ever league placing and leading Seaford Town to their first ever Senior trophy win.
Tobi is now a lead coach with Brighton and Hove Albions Pre Academy where he coaches the elite U7s and elite U8s prior to them registering at the full Academy.
He is UEFA B Level 3 qualified and has also taken the new FA Youth Module Award levels 1, 2 and 3. He has completed courses in safeguarding children and emergency aid as well as being educated in drug awareness, food and nutrition and psychology in sport. Tobi is fully enhanced CRB checked.