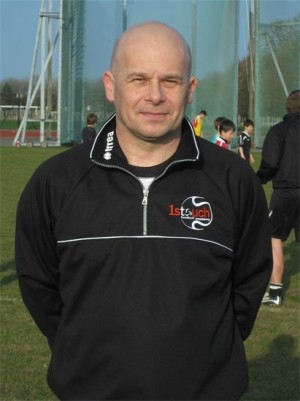 Steve was a youth team player at Wimbledon FC and Crystal Palace FC before moving into non league football with a host of Ryamn League clubs such as Epsom and Ewell, Molesey, Whyteleafe and Banstead where he appeared in their FA Vase semi final just one step from the dream day at Wembley. On moving to the south coast Steve played and coached at Eastbourne United as they won the league and cup double for the first time their history.
Having initially taken the original FA Preliminary Coaching Badge in 1994 Steve has become a highly experienced coach, working as a member of the PE staff at Wilsons Grammar School in Wallington for the last 22 years, where he coaches the year 7 to 11s PE curriculum, aswell as being the schools lead football coach.
Steve has recently completed his level 1 Athletics coaching qualification and Athletics Health and Safety award 1, giving him a unique and excellent knowledge of body mechanics and running techniques required by athletes of all disciplines. Steve is shortly moving onto his level 2 Athletics qualification as well as the FA Youth Modules. He is FA Qualified and fully enhanced CRB checked.